This fabulous soup is easy to make and filling while still rich in taste.

Fill up a pot of water (about four quarts) with better than boullion (you can substitute organic chicken broth). Bring to a boil and then lower to a simmer. Add to the soup a chopped up head of cabbage, five chopped zucchini, two cans of white beans, four peeled and cut potatoes and one or two no-skinned chopped tomatoes. I add red trocomare or seasoned salt (or both), and Celtic sea salt and pepper.

In a skillet I pour grapeseed oil to nicely coat the bottom of the pan and place four chicken breasts in the skillet with seasoning. My favorite way to season chicken for this dish is with onion powder garlic and some trocomare or season salt. Brown the chicken on both sides. Slice and throw in the soup.

Let all of this cook for at least two hours on low. Voila! A fabulous feast that’s clean, healthy, filling, and tasty too!

When we honor who we are as soulful women, we become courageous in our vulnerability, therefore allowing true connection with ourselves and others granting us the permission to be human and still loved.

This site, and my book, The Soul of a Woman, are my contributions to the global sisterhood of women. Articles that help us better ourselves, live healthier lives, and nourish who we are as women so we can empower each other to reach as high as we want to go.

My goal is to help my soul sisters cultivate beauty, power and purpose in their lives -- changing the world one sister at a time.

Receive the latest news from Tina via email and become a soul sister! 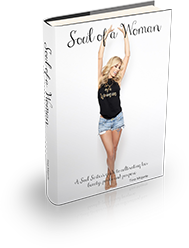